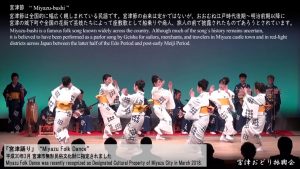 “Miyazu Folk Dance” is a unique art form born out of the Tango peninsula`s rich historical and cultural backgrounds.  It is comprised of three dances: “Miyazu-bushi” a traditional folk song of the area, “Miyazu Bon-odori Matsusaka”, and the “Aiyae Dance” which is said to have originated in the Kyushu area of Japan.  Because of the great cultural value it possesses, Miyazu Folk Dance was recently recognized as Designated Cultural Property of Miyazu City in March 2018.

First, Miyazu-bushi. Miyazu-bushi is a famous folk song known widely across the country.  Although much of the song`s history remains uncertain, it is believed to have been performed as a parlor song by Geisha for sailors, merchants, and travelers in Miyazu castle town and in red-light districts across Japan between the latter half of the Edo Period and post-early Meiji Period. 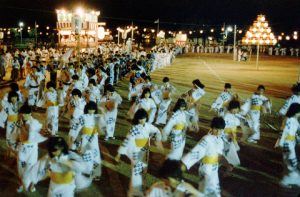 Miyazu Bon-odori Matsusaka is a Bon-odori song and dance that is representative of the old castle town and was even once referred to as the “Miyazu Dance Song”.  The most prominent theory concerning the song`s origins states that the “matsusaka”, a dance originating from “Ise-odori” spread throughout the country.  It is also said locally that the dance, originally taught to samurai as a type of training, spread to the castle town in 1758 when the Honjo Matsudaira family came to rule the Miyazu Clan.

The “Aiyae Dance” is said to originate from Kyushu`s “Haiya-bushi” which spread to several port towns including Miyazu across Japan via sea route.

All three dances each possessing their own unique origins have been passed down through the generations by members of the Miyazu red-light district and people of the old Miyazu castle town.  As the three dances spread and continued to be promoted, they were eventually combined and brought together as a sort of folk song suite and given the name “Miyazu Folk Dance”. 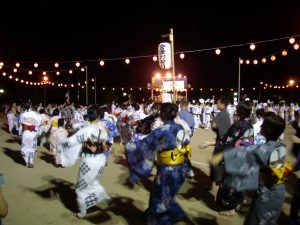 Since then, the dances have continued to be promoted through the enthusiastic efforts of former Geisha, folk dance groups, and citizens beginning with regular performances by the Miyazu Dance Promotion Association.  The dances are now known throughout Japan. The dances have also become popular among the citizens and are widely cherished as representative Bon-odori songs of Miyazu as can be seen at the annual Miyazu Citizens` Bon-odori Folk Dance Competition held every year on August 15th.  Miyazu Folk Dance`s value as a method of conveying the spirit, vitality, and historical significance of Miyazu castle town which historically flourished as a port town along the Sea of Japan and a pilgrimage site being the location of Amanohashidate is immeasurable.